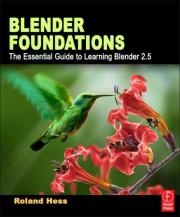 About eight month ago I started using blender. I learned by watching different tutorials and mainly trail and error. Now however I thought a book covering the basics would come in handy. Therefore I selected Roland Hess Blender Foundations – The Essential Guide to Learning Blender 2.6.

The quality of the 400 plus pages is excellent. The illustrations are in color with special focus on contrast for better visibility. The book starts out with the basic building blocks of 3D animation, so it is a good starting point for anyone who is new to 3D modelling in general. Mr. Hess then proceeds to introduce the user interface, its different views and the basic transformations. These take about one seventh of the book.

The rest of a book works toward a scene of a room with a kid. The next 40 pages are devoted mesh modelling with various tools. Next follow chapters on lightning the scene and building a character to finally arrive at the chapter on surfacing. The whole part on the different textures is in large part glossed over. Next up is a short chapter on sculpting which works toward creating low poly models through baked in textures, however without mentioning that.

Basically that next three large chapters concern itself with rigging the character, adding shapes and animate the whole thing. This is relay heavy stuff and I must confess, that I did not understand everything, but then I’m not into character modelling. However having read these chapters I begin to understand, what Angela tried to demonstrate in her tutorials on the Sintel DVD. The chapter on animation itself is very valuable and contains a big block about the Compositor and describes some the the available controls.

The second last chapter covers the physical engine for simulation in blender. While I do not consider this beginners stuff it is educational and easy enough to start with, especially when it can produce nice effects in animation.

The final chapter is a short one but never the less important. It explains how to put all the efforts together to create a video file that can be shown off. It includes editing, adding sound and effects.

Most chapters have also some videos on the accompanying web site. They come in two flavours: With and without sound. The ones without are a little hard to follow, if you do not have the respective chapter fresh in mind. The sound on the others is terrible. The quality could be better as well. The resolution is pretty low and if you blow them up to full screen it gets blocky. There are also videos mentioned in the book, that are missing on the web page. Some of the exiting ones however show that Mr. Hess knows how to achieve certain effects and are really educational, especially because they cover stuff only mentioned in passing.

Mr. Hess certainly knows what he is talking about and can describe it in a clear and understanding manner. These explanations are helped along with high quality illustrations.  Most of the chapters also include a paragraph on what is not covered.

His style however was not entirely to my liking. This is purely personal and does not reflect the quality of the book, you might have a different opinion. In some part he appears to be gloating, what a genius he is. This adds nothing to the matter at hand. Here a preface written by a friend praising his virtues would have been better placed. On a similar note I sometimes had the impression Mr. Hess is an amateur comedian trying to be funny by commenting on some technique or other.

On the publishing side I noted some errors that leave the impression, that the contents was reviewed, changed and then printed. For example at the end of chapter 7 it says „In Chapter 8, we look at rendering and compositing.“ Chapter 8 however is about sculpting and the mentioned chapter is in fact number 12. Another obvious flaw is in the title itself: Blender 2.6? The book was released in 2010 were did he get that version? Even if it may have looked like 2.6 would be released soon, it would have been a better move to stay with the facts: Written with Blender 2.5 alpha but should work as well with 2.6.

For someone new to 3D modelling some of the chapters are too advanced and some basic stuff is brushed aside. Throughout the whole book it is expected to follow the process along, which is good for learning. Proceeding further, less hints about already covered topics are given, so you are likely to struggle and have to go back. In 3D modelling I see modelling, lightning and surfacing as the basics. From a beginners book I do not expect more. These topics however are packed together on about 100 pages (a quarter of the book). Other topics (character modelling, rigging, animation), which are complex enough to fill their own books are also covered.

Other topics, that are not directly related the finished model, but are inherent to the process of achieving it, are completely left aside: That you should name your objects is mentioned in the part about rigging for the fist time. At this point you might already have adopted the bad habit of not naming them. Other examples are, how can you cheat and how to organize: add something as a separate object or add it to the same mesh or how to use groups and parenting together with empties.

One of the philosophies this book is build up on is „Close observation“. This leads to the subtle undertone: if you do not have a good eye, you will be crappy. Well this is always a question of perspective. Mr. Hess tries to achieve photo realism. That may not always be the aim. Another question is the level you are aiming at (professional, amateur or just for fun). A side effect of this is that to follow the book along we have use some pre-modelled stuff (head and hands).

Overall the the price/performance ratio is good. If you really want to learn the basic blocks of modelling with blender you are better of with the online tutorial by Neal Hirsig.

I will close this review with a (last) personal note: The book makes good reading however it is useless as a reference. I learned some new (or at least not yet memorized) short-cuts. As I do not consider myself a bloody beginner, I profited from the advanced topics in the sense, that I now have a better picture of what is what. From a book aimed at this level I would expect more of the basics. There are a whole range of tools and modifiers (constraints are not even mentioned in the first part) that are left aside. I would have appreciated a wider rage with the drawback that these do not work to one final model. In the texturing portion I expect Mr. Hess to put his personal preferences aside and explains more about the procedural textures. He says he’s not using them however they creep always in (seldom though as the main texture). Having read the book I found his own announcement which addresses most of my points. Unfortunately this insight was not available at the point of selling (Amazon).